This film puts the spotlight on this ruling class and the manifold issues facing the country. Through incisive key interviews with whistle-blower, former Director General of the Ministry of Finance, Alain Bifani, Civil Activist, Dr Carmen Geha Professor of Public Administration at the American University of Beirut, academic and author,ThanassisCambanis, and Arab American Institute President Dr James Zogby, we blow the lid on the under-the-table, pie-sharing deals that have permitted many of the current political leaders, their families, and cronies to remain in power for decades.

The hard-hitting documentary gives an unparalleled platform to civil society leaders, the everyday man, woman and child whose lives have been destroyed and disrupted by the failings of an incompetent and complacent leadership who have brought the country to its knees, resulting in an unprecedented economic crisis that has witnessed the country default on its international loans for the first time in its history, left more than 60% of the population poverty stricken, unable to withdraw their own money from their own bank accounts, while billions of dollars belonging to the privileged elite were secretly spirited to offshore accounts only days before the March 2020 collapse.

The political confessional system, once universally hailed as the model of co-existence by other nations and even the Pope, comes under harsh scrutiny as a weak and impractical structure that provided the ideal environment and vulnerabilities that sanctioned the current octopus-like oligarchy to be created, and whose turgid tentacles reach deep into the bowels of society, and whose sting has resulted in countless assassinations and untold, unanswered destruction.

The film addresses the revolution and the global social justice movement that was triggered in 2019 among the diaspora who rallied to support their families and friends back home. It provides a powerful insight into the complex traditional and emotional loyalties among the people that stillthreaten any chance for change.

The people have a chance to save themselves, their future and their nation with upcoming national elections in May 2022. This film aims to be the trigger that launches a global movement #freeandfairlebanon to force real change.

Seen through the eyes of Lebanese-Australian journalist/filmmaker/businesswoman and mother, Daizy Gedeon, this film is the wake-up call for all people to stand against oppression and corruption by using their voice and democratic right to vote – VOTE FOR CHANGE!

ENOUGH! Lebanon’s Darkest Hour was a finalist at the APOX Film Festival, held in Croatia on the island of Losinj. 2021 was the inaugural year of the festival, which was created to feature documentaries that explore current world issues in an innovative and authentic way.

The festival promotes independent filmmakers in their telling of the authentic stories of their own cultures. 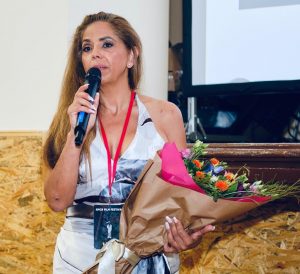 We will definitely revolt! This time, for change!

Huge shoutout to everyone who supported and voted

Throwback to the testimonials of our attendees aft

Georges Tomb is an award-winning composer and conc

Sometimes difficult decisions and a leap of faith